March 20, 2015 By Carl Proper in Labor and Economy Leave a comment 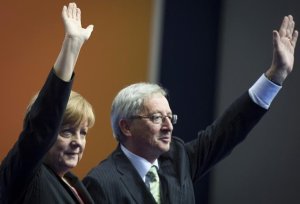 Corporate America’s relentless campaign to evade or reduce taxes has scored an uncertain victory in Europe with the elevation of Jean-Claude Juncker to President of the European Commission (the highest Europe-wide office.[i])

As Prime Minister of tiny Luxembourg for most of the past eighteen years, Juncker made that country a low-tax haven, persuading more than 300 U.S. and other foreign companies to incorporate and declare earnings there for tax purposes. In recent years, some other European countries – notably Ireland and Netherlands — have also hidden special tax breaks for favored companies, and facilitated virtually total tax avoidance through scams to attribute earnings to various Caribbean islands.

But today, that form of capitalism is under increasing attack through much of Europe.   An aroused public wants governments to end corporate evasion of billions of Euros in taxes owed there, as national budgets face budget shortfalls and austerity. An investigation by the Europe-based International Consortium of Investigative Journalists [ii] recently charged that global corporations PepsiCo, Ikea and FedEx had benefitted from preferential deals with the government of Luxembourg, in violation of European Community rules. FedEx, the Consortium explained, had “set up two affiliates to shift earnings from its Mexican, French and Brazilian operations to…Luxembourg largely as tax-free dividends. Luxembourg agreed to tax only 0.25 percent of FedEx’s non-dividend income flowing through this arrangement, leaving the remaining 99.75 percent tax-free.”

Shortly before Junker’s appointment[iii], however, European Competition Commissioner, Joaquín Almunia, from Spain, began an investigation of Luxembourg tax breaks given to a unit of Italian auto manufacturer, Fiat; and initiated investigations of unusual Irish tax arrangements for Apple, and Dutch incentives for Starbucks. French and German politicians have recently called on Google to pay more taxes in Europe, where Google’s search engine has a more than 80 percent market share.  And Britain has proposed a new 25 percent tax on the local profits of international companies.[iv]

As the motive for the tentative rebellion, much of Europe has yet to recover from the effects of enforced austerity, huge budget cuts and mass unemployment that followed the 2008 economic crisis. In the years following that crisis, Juncker presided over the Eurogroup of ministers who made critical decisions imposing austerity on countries like Greece and Spain, often at the behest of Germany.”[v] Now people are asking why, with budgets in crisis, wealthy corporations are given a bye on potentially billions of dollars in taxes. Under pressure, even Luxembourg has pledged to sign on to an expanded program that would share data on wealthy Europeans who have used Luxembourg to hide their money.

As the new Commission chief, Juncker denies that he was ever part of the problem. “I have never given illegal tax instructions,” he told the European Parliament. “Don’t depict me as a friend of big capital.”[vi] He has promised to do his utmost to make the system watertight, closing loopholes for profits from unethical tax avoidance. What we want to see,” he says, “are fairer rules between the different European member states.”

Whether corresponding action is taken, of course, remains to be seen, and depends heavily on the position taken by German Chancellor Angela Merkel.

In much of the U.S., by contrast, government and taxes are resented as much as tax-dodging global corporations. President Obama wins little credit for denying – for six years and counting — tax incentives to U.S. global corporations for “repatriating” $1.7 trillion in accumulated earnings attributed – accurately or not – to overseas locations like Luxembourg or the Caribbean. Corporations reporting massive financial assets overseas have not budged either. They remember 2004, when (as reported earlier on this blog) President George W. Bush permitted “repatriation” of more than $300 billion in alleged overseas earnings at a derisory 5.25%, rather than the nominal 35% corporate rate. While the Bush deal had supposedly included corporate commitments to invest the newly available wealth in U.S. job creation, most was simply paid to happy stockholders, no strings attached.

It seems likely that the Administration standoff with Apple and its peers will last until a new Administration takes office. But it could ultimately require a Presidential veto to block the massive gift to the richest. Congress would be open to acting now. Outgoing Senate President Harry Reid has publicly suggested a 9.5% repatriation tax[viii], and Republican Ron Paul would offer 5%[ix]. And, at the end of a 2014 hearing highlighting Apple, Inc.’s phony attribution of taxable earnings to a variety of overseas tax havens, Permanent Investigations Committee Chair Carl Levin gushed about what a great company Apple was, and how he loved his I-Phone. No legislation resulted from the hearing.

Republicans, and some Democrats, in fact, would like to go still farther toward global corporate independence, supporting a shift away from taxing overseas earnings of global companies altogether, and toward a “territorial tax,” in which virtually stateless corporations would pay taxes country-by-country, presumably wherever their lawyers could pretend they had earned the money.[x]

A key missing element in this kind of “reform” is any demand for honest proof as to where the wealth is created.

Evidence of false attribution of earnings, including to tiny buildings on Caribbean islands, is, in fact so abundant, and so obvious to any who care to investigate, that conversations about earnings “for tax purposes” can be fairly compared Alice’s conversations with Humpty Dumpty in “Through the Looking Glass”:

As for the question, “which is to be master?” in our 21st-century world — whether elected governments or for-profit corporations – a key test will be the willingness of governments to call bald-faced corporate lies by their name, and to collect fair taxes, reflecting facts on the ground. If semi-socialist European opinion will step into the breach on the tax issue, compel Juncker (and Angela Merkel) to change direction and move toward transparent and fair corporate taxation, the possibility of a positive answer will remain on the table.

[i] In the Eye of a European Political Storm Stands a Quiet Enigma, JAMES KANTER, NY Times, JUNE 26, 2014

[iii] The Commissioner is actually nominated by European Union Prime Ministers, and then voted on by the E.U. Parliament – but the great powers – Gemany first – get their way.